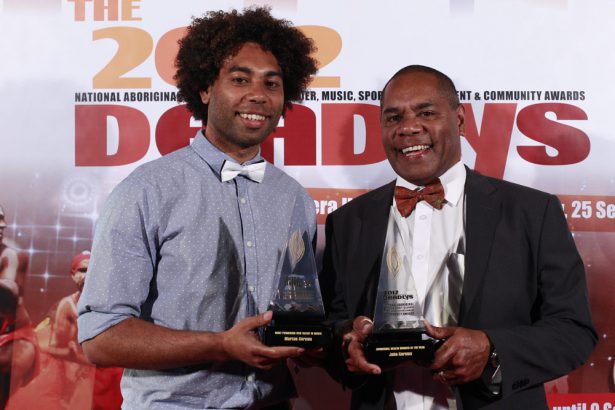 Each year the Deadlys showcases the best of Aboriginal and Torres Strait Islander talent who are role models for our community, for Australia and particularly our young people.
In 2013 and across 28 award categories there’ll be the achievers – those who’ve shown what it takes to strive for excellence in their field whether it be music, sport, the arts, entertainment and at the grassroots level.

They’ll be plenty of well-known names in the Deadlys list of finalists and the announcement of winners, and there’ll also be the unsung heroes making a difference to the community each day.

In 2012 Jess Mauboy who’s profile is increasing nationally and internationally won Female Artist of the Year. First appearing on Australian TV as a shy 16-year-old on Australian Idol in 2006, Jess is now a multi-award winning artist in both the music and the film industries and showing us where hard work, commitment and drive can take you.

The big names dominate the Deadlys NRL and AFL Sport categories, but Most Promising New Talent in Sport in 2012 was Olympic boxer Damien Duncan Hooper who showed what it means to stand up and be proud of his Aboriginal heritage, wearing an Aboriginal flag T-shirt into the Olympic ring.

The Film of the Year category reflects where Indigenous producers are putting their focus on telling our stories our way, and bringing cornerstone issues to the screen and into Australia’s consciousness. In 2012 ‘Mabo’ won the Deadly in this category – telling the story of Eddie Mabo’s courageous and pioneering fight for native title.

And then there’s the community heroes who make their mark driving forward the health, education employment, and culture of Aboriginal and Torres Strait Islander people.
The Deadlys Health award and Health Worker of the Year are two awards that show the hard work and commitment of individuals and organisations to improve health outcomes. From ante-natal and primary health programs, through to drug and alcohol work and social and emotional wellbeing initiatives, these awards shine a light on the commitment and dedication of our people at the community level.

He employs and mentors Aboriginal apprentices through their carpentry training and, over the years, has helped many Koori kids succeed in establishing rewarding careers.
So if you know a Deadly role model get your nomination in, so we can put the spotlight on their achievements, and inspire our young people to be the best they can be.

One Response to “Deadly role models – are you one?”