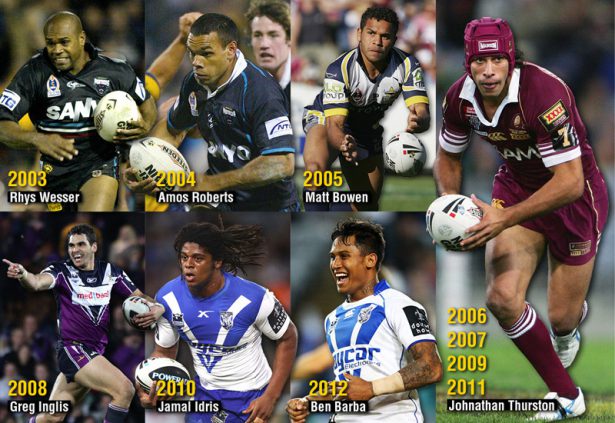 The Deadly Award for NRL player of the Year is always one of the most highly anticipated and hardest to pick each and every year. You only need to listen to Ben Barba’s acceptance speech at least year’s event to know what it means for the players to receive it. Despite playing in a Grand Final just two days after the 2012 Deadlys, Ben made sure he was at the Opera House to accept the award and spoke of what an honour it was to be recognised by his mob.

Ben is just the latest in a long line of outstanding Indigenous league players to have accepted this award, the first being former Panthers and South Sydney fullback Rhys Wesser, who won in 2003. That was the year the Panthers enjoyed their memorable Grand Final win and Rhys finished the season as the league’s leading try scorer.

Regarded by many to be the world’s best player, it isn’t surprising that Johnathan Thurston can lay claim to owning the most number of Deadlys for Achievement in the NRL. The Cowboys and Queensland half is in fact the only player to have won the award more than once, and was voted the top Indigenous league player in 2006, 2007, 2009 and 2011.

Having won the Golden Boot, the Wally Lewis Medal and various other accolades, and considering his stature in the game, it is somewhat surprising that Greg Inglis to date has won just a single Deadly award. That honour came in 2008 when Greg was voted as our leading player after a spectacular year in which he was also named Five-Eighth of the Year and Representative Player of the Year at the Dally M Awards.

Last year, Ben Barba was a race away winner for the award thanks to a sparkling run of form that also saw him claim the Dally M Medal, and this year – with so many talented players to chose from – the award is once again wide open. Will Thurston add to his growing collection, or is Inglis deserving of his second? Will Ben Barba’s enormous popularity put him into contention once more, or will the hard graft of toilers like Sam Thaiday and Greg Bird see them over the line? Of course, there are many others who could raise a hand to be considered.

One Response to “League stars square-off for Deadlys honour”

Leave a Reply to Valerie Johnson