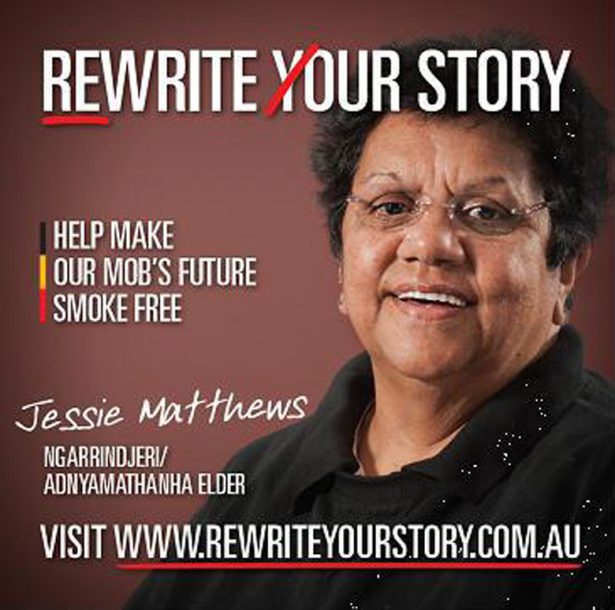 In a night of recognition for Aboriginal and Torres Strait Islander leaders on the national stage, the Rewrite Your Story campaign was honoured with the Excellence in Health Through the Promotion of Healthy and Smoke Free Lifestyles Award at the 19th Deadlys® on Tuesday night, at the Sydney Opera House.

The Rewrite Your Story campaign, developed by the Puiyurti team at Nunkuwarrin Yunti of South Australia Inc, embraces the culture of story-telling and yarning through the power of film and social media.

Rewrite Your Story is a community development campaign aiming to raise awareness of smoking’s harmful effects on your body and community. The campaign featured the real-life smoking stories of 16 local ambassadors to inspire Adelaide’s Aboriginal communities to rewrite their stories and give up smokes for good.

The campaign doesn’t preach the ‘don’t smoke message’, but encourages the community to come together, share their stories and support one another to break the smoking cycle.

It was supported by the South Australian Government’s Give Up Smokes for Good campaign in partnership with the Aboriginal Health Council of SA, Port Lincoln Aboriginal Health Service, and the Cancer Council SA.

The campaign has been well received by the Aboriginal community of Adelaide and has been widely covered in media, as well as being picked up by NITV who have committed to showing these stories over the next three years.

This is the first year the Excellence in Health Through the Promotion of Healthy and Smoke Free Lifestyles has been awarded and it is proudly supported by the Wellington Aboriginal Corporation Health Service (WACHS). Wellington Aboriginal Corporation Health Service (WACHS) aims to empower Aboriginal and Torres Strait Islander people to take control of their individual, family and community health needs through the Aboriginal community controlled health service model.

WACHS is a non-for-profit organisation that provides specific health and specialist programs to support clients/ patients in addressing their health and well-being needs and issues in a culturally appropriate way. As well as providing these specific health related services, our service endeavours to provide self-determination and empower Aboriginal people to take control and responsibility for their health and well-being.

You can keep up to date with all the Deadlys® news at facebook.com/vibeaustralia and through Twitter @Deadly_Vibe #deadlys. You can also head to deadlys.com.au and subscribe to Deadly Vibe Wire at www.vibe.com.au