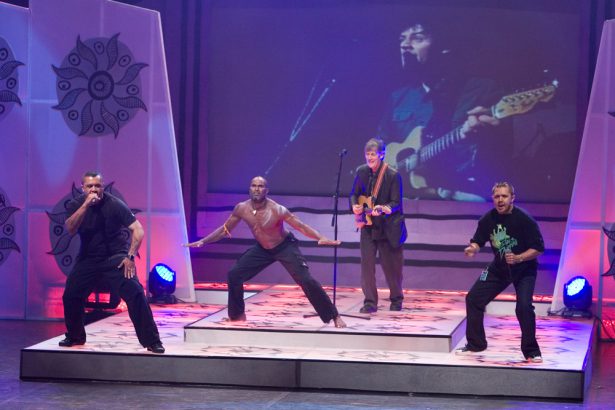 People travelled from across the country, from Cairns and Elcho Island in North East Arnhem Land to western Australia and all other states to be welcomed to Eora country and the annual gala evening by host Luke Carroll who is riding the tide of success with his recently released movie Stone Bros. From more than 8000 nominations made from people right across Australia, there were 80 finalists vying for a coveted Deadly award and Deadly ring – something worn proudly by winners over the years.

Executive Producer of the Deadlys and Vibe Australia director Gavin Jones said this year’s Deadlys was the best yet. “It’s amazing how much talent there is amongst our people and its always a surprise on the night, because you never really know how the community will vote,” he said. “Shining stars like Jess Mauboy who we first saw in Tamworth and is herself a past Deadly winner, clearly shows the level of talent – that’s just in music! “Over the past 12 months, we have seen Black Australia stand up and be applauded with the likes of Geoffrey Gurrumul Yunupingu’s resounding success around the world; Patrick Mills’ draft to the NBA; Anthony Mundine’s taking of the IBO super middle weight world title; Jamie Soward as top point scorer in the NRL and fellow footballer and newcomer Jamal Idris announced as NRL Rookie of the Year; while Rohanee Cox who won most valuable player in the WNBL. “As well as sporting and music achievements, we have seen Warwick Thorton’s film Samson and Delilah nominated as Australia’s official entry in the Academy Awards and helped celebrate 20 years of the Bangarra dance company. “As always, the Deadlys are a showcase of the strength, pride, talent and determination of Australia’s Aboriginal and Torres Strait Islander people.”