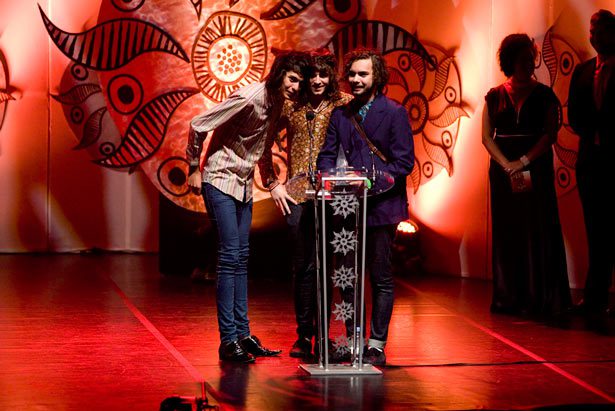 The quest to find Indigenous Australia’s best and brightest this year has culminated with the announcement of the 2010 Deadly Awards winners. At a gala awards night held at the Sydney Opera House, winners were announced from a nominees’ list that reflects the depth of talent and achievement Aboriginal and Torres Strait Islanders have demonstrated in 2010.

The 16th annual National Indigenous Music, Sport, Entertainment and Community Awards, aka the Deadlys, is Australia’s largest Indigenous award’s night and the final winner in each of the 28 award categories didn’t disappoint. From the grassroots musicianship of our Deadly musicians to the grit and determination our Deadly sportstars have shown in 2010, not to mention the inspiration and achievement of our artists and community awardees, all winners took a deserved bow on the mainstage.

Executive producer Gavin Jones described the 2010 Deadly Awards winners as “simply the best”. “We had a record 29,000 votes this year, showing the strong support Indigenous Australians have given the 2010 Deadlys,” he says. “I don’t think the voting public will be disappointed with the calibre of our winners – not only the best and brightest Indigenous Australians in 2010, but amongst the best talent we have in this country today.” The Deadlys show was dynamic with performances by some of the biggest names in Australia’s music and arts scene.

Deadly Awards hosts for the night, Luke Carroll and Naomi Wenitong kept the audiences entertained throughout the evening. The 2010 Deadly Awards will be a tough act to follow, according to Mr Jones. “Each year the show is one not to be missed and mainstream Australia is now recognising the worth of the Deadly Awards,” he says. “The Deadly’s deliver a strong and healthy message to the Aboriginal and Torres Strait Islander community – that, hopefully, is an inspiration to young Indigenous Australians, indeed Indigenous Australians across the country.”