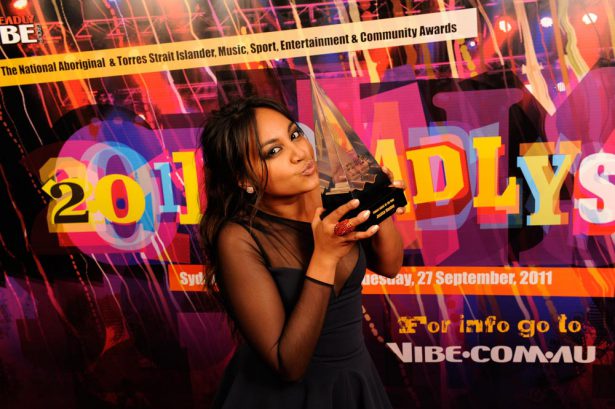 From the opening strains of Northern Territory singer Shellie Morris’ song ‘Yarrbanthalu’ in language and backed by the Yanyuwa Singers and the Gondwana National Indigenous Children’s Choir, audiences knew the 17th Deadly Awards promised something spectacular.

The high moments kept on resonating as Gurrumul Yunupingu picked up two awards for Male Artist of the Year and Album of the Year for ‘Rrakala’ while songstress Jessica Mauboy took out the coveted Female Artist of the Year Award. Mad Bastards was the standout Film of the Year, against a strong line-up including director Ivan Sen’s Toomelah, which was selected for the 2011 Cannes Film Festival. Producers the Pigram Bros were on hand to accept the award, and later performed on centrestage.

Hip Hop was well represented with the Last Kinection named Band of the Year and Single Release of the Year. Up and coming talents from the Northern Territory, Iwantja Band, went home with Most Promising New Talent in Music.

Perhaps no surprise were the winners in the football codes. Outstanding Achievement in NRL was a touchdown for Cowboys co-captain Johnathan Thurston who was once again the people’s favourite, having won Deadlys in 2009 and 2007. Carlton’s Andrew Walker was always a strong contender for Outstanding Achievement in AFL. Narrowly missing out on 2011 Mark of the Year, Andrew was at the Deadlys to savour his moment. Young Tanisha Stanton whose representative netball career is firmly on the rise was named Most Promising New Talent in Sport, while Women’s National Basketball League (WNBL) sensation Rohanee Cox was named Female Sportsman of the Year. Former NBA and now Melbourne Tigers player Patrick Mills picked up Male Sportsman of the Year.

City Homicide’s Aaron Pedersen and Offspring’s Deborah Mailman earned a top spot in Male and Female Actor of the Year categories. SBS and Living Black presenter Karla Grant were honoured with a Deadly for Television Show of the Year. Dancer of the Year went to Bangarra’s cultural consultant Kathy Marika and Anita Heiss was the people’s favourite in the Outstanding Achievement in Literature category.

The Deadlys Health awards took centrestage to spotlight achievement in health programs and services for Aboriginal and Torres Strait Islander communities. From Alice Springs the NPY Women’s Council – “No Safe Amount – The Effects of Alcohol in Pregnancy” showcased how a community driven program can tackle the hard edge issues of drinking during pregnancy. Aboriginal Health Worker Muriel Jaragba has been at the forefront of Aboriginal mental health for well over a decade and her efforts were acknowledged with a Deadly. The Outstanding Achievement in Aboriginal & Torres Strait Islander Education, proudly supported by the Department of Education, Employment and Workplace Relations went to innovative Victorian program The Deadly Ute Project, developed by Goolum Goolum Aboriginal Co-operative through Wimmera Hub and Ballarat University.

The Employment award was won by Black on Track, a program all about creating opportunities for all Indigenous Australians to identify, accept and self-heal by taking responsibility for their life choices, and becoming empowered through self-worth. Broadcaster of the Year went to WA personality Karla Hart from Noongar Radio, 100.9FM.

Deadlys Executive Producer/Artistic Director Gavin Jones described the awards as the best yet. “What a night at the Sydney Opera House as Aboriginal and Torres Strait Islander people got behind their Deadly Award winners, through record voting and firmly endorsing their heroes,” Gavin said. “The Deadlys go from strength to strength each year. We have strong finalists and winners to showcase, some of Indigenous Australia’s best talent to grace the Opera House stage and the overwhelming support of Aboriginal and Torres Strait Islanders and the wider Australian public as ingredients that produce a very successful national awards night. “It is an honour for Vibe Australia to produce the Deadlys and bring that special magic that is the Deadlys forward for all to enjoy.”