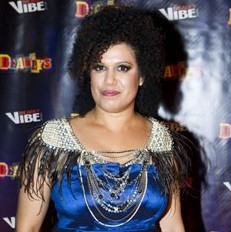 Christine is playing Island matriarch Bloody Mary in Opera Australia’s production of Rodgers & Hammerstein’s South Pacific, and will be moving between shows and auditoriums on the same night to perform at the 2013 Deadly Awards; a first in the history of the Sydney Opera House.

The Deadlys will be held on Tuesday 10 September at the Sydney Opera House, beginning with Deadly Dressed and the Sunset Awards at 4.30pm and the Deadlys Comedy Gala at 7.30pm in the Concert Hall before the mainstage show.

Deadly Award producers have ensured Christine’s performance will be memorable and have set the stage for the Deadlys to be transported through time to World War II with visuals and sound effects. They’ve also been liaising with Opera Australia to ensure Christine’s dash between the two stages goes smoothly.

“To have Christine Anu perform at the Deadlys on the same night she is performing in South Pacific is probably unprecedented that a performer can appear in two productions on the same night. But we have made sure it’s all workable, and we are really excited about the performance,” Deadlys Executive Producer Gavin Jones says.

“When you look at the similarities of the South Pacific storyline to what occurred in the Torres Strait Islands in World War II, and even the narrow-minded prejudices which threaten the budding romance between a US navy officer and the daughter of Island matriarch Bloody Mary in South Pacific, you begin to see that it’s a good fit for the Deadlys stage.”

Christine is a multi-award winning recording artist and was born in the Torres Straits. She is a long-time supporter of the Deadlys, winning numerous Deadly Awards over the years and performing her hit songs on the Deadlys stage. She has also a number of ARIA awards including ARIA Song of the Year for My Island Home, ARIA Best Female Artist for Stylin Up and ARIA Best Video for Bazmark’s Now Until The Break of Day with David Hobson. South Pacific is on at the Dame Joan Sutherland Theatre from 8 September and in Perth from 10 November and Adelaide from 29 December.

The Deadlys is produced by Vibe Australia and is in its 19th year. It’s the biggest Indigenous awards night on the Australian calendar and enjoys strong support from Indigenous communities across the country, and across non-Indigenous Australia.

One Response to “Deadlys transports to Pacific”